Home » blog » blog » As I Am by Melissa Collins: Sneak Peek 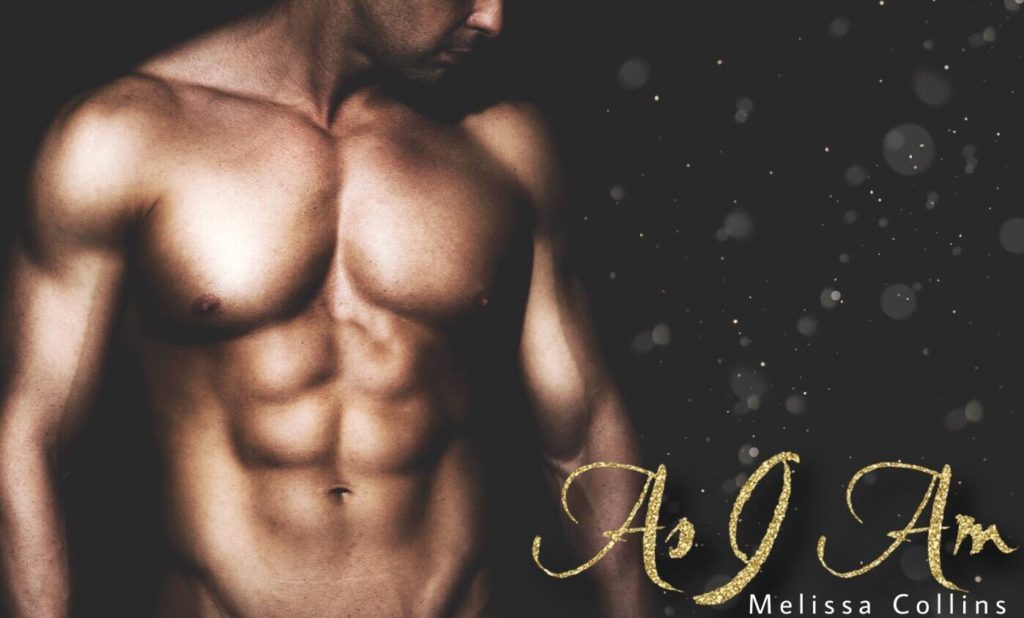 I am so freaking excited to share this snippet of my next book, As I Am (A MM romance) with you. Enjoy and be sure to add to your GR TBR –> https://www.goodreads.com/book/show/35408623-as-i-am

Pulling up into my driveway, it was almost as if my bed was calling to me, my muscles aching so much with every step up the walkway. “I’m getting so fucking old,” I cursed to myself, adjusting my messenger bag over my sore shoulder.

As I punched the numbers into the keypad, I waited for Katie to bark, knowing she’d be itching to get out. Even though the dog walker I’d hired had been here today, I knew Katie would be anxious to see me after an exceptionally long day.

Except, after hitting the fourth button, I heard nothing. Odd. Maybe I forgot to set it. Maybe the dog walker forgot. The second option was the more likely one. I guess that would have to be something I’d need to take up with her another day. Since I didn’t have the energy to deal with it right now, I let my exhaustion take over and made my way up to my bedroom. Surely Katie had to be curled up on my bed, waiting for me there.

“Katie girl,” I called out, pushing open to door to my bedroom.
A shock like I’d never known washed over me as the light from inside my room flooded my senses. “Fucking hell,” I cursed, clutching my chest as if my heart had actually jumped out of my skin.

“Hey.” A sexy, and gravelly voice spoke. Blinking away the bright lights offending my eyes, I tried to make sense of it all, but it was pointless.

“It’s me,” the voice said again, this time moving toward me. “Chase,” he clarified, though I didn’t need the clarification at this point.

“What are you doing here?”

He laughed at my pointless question before answering, “I used the code you gave me last week, and I’m waiting for you in your bedroom.” He moved toward me, each step an agonizingly slow process. When he was no more than only a few centimeters in front of me, his toes nearly touching mine, he finally touched me. His hand cupped my jaw, his thumb softly grazing over my lower lip. “I think my intentions are pretty clear. No?” A glint of humor flashed in his eyes before his mouth crashed into mine. There was nothing soft about the moment. The feel of his lips, tasting, demanding, invading, it was too much to bear.

Stepping back from him, my mind raced. He all but broke into my house. He was lying in my bed. All nice and fucking cozy. “But,” I protested.

“I know.” Without letting me finish, Chase spoke, and his words were already soaked in guilt. “It’s not the most traditional way of going about seeing you. But…I…uh…” he stammered. This time I moved toward him, cupping his face, running my thumb along his jaw. He closed his eyes and let out a slow exhale, his lips barely parting. “I wanted you,” he admitted, his voice real and raw.

And in that moment all my concerns, all my questions, washed away.

They melted into his skin as my body pressed against his.
Then, all at once, every restriction I’d ever felt, coursed through my blood as if they were cursing their very existence – screaming, yelling, raging, to be released. I’d like to say that I actively decided to let go of whatever had been holding me back over the last few days – hell, over the last few years.
But nothing could explain the raw animalistic power possessing my body.

Letting the passion I needed to experience flow through my veins, I pushed Chase down onto the bed. The pause I took to register the shock on his face was brief – at most. But somehow, seeing his eyes widen in shock, and his mouth part as he took in the extra oxygen his lungs so desperately needed, it fueled my need that much more.

My body fell into his, the soft mattress beneath us a cushion, enveloping our bodies as they writhed together in a hazy cloud of power and desire. With a fury I hadn’t realized I’d possessed, I pulled his shirt from his body, nearly tearing the fabric in the process. Pressing my hips into his, I kept my face less than an inch form his face. My breath, coming out in short, heated puffs, filled the limited space between us. “I want you, too,” I admitted.

With a roughness that was foreign even to me, I gripped his jaw, pulling his mouth up to my own as if my next inhale was dependent upon his exhale. “I don’t even care how, you got in here.” The honesty coating my words was as genuine as the rock hard erection pressing against Chase’s. “Just that you’re here, that’s all I need right now.”

And with that admission, I attacked his body as if it was the last meal I’d ever be offered.

One thought on “As I Am by Melissa Collins: Sneak Peek”